With industrial unrest on an unprecedented scale and the city enduring one of the worst IRA atrocities on mainland Britain, cultural life in ‘70s Birmingham could have taken a very dark turn.

But exactly the opposite happened. The city went on to produce some of the biggest names in popular music history and venues like Barbarella’s and Rebecca’s – owned and operated by ‘King of Clubs’ Eddie Fewtrell – dominated the night scene for the majority of the era.

The decade is chronicled like never before in the brand new ‘Dirty Stop Out’s Guide to 1970s Birmingham’ book which has been researched and written by local brothers Jim and Ron Simpson who have been at the very heart of the city’s music scene since the late 1960s.

Duran Duran, UB40, Dexys Midnight Runners and many more found initial success in the 1970s and feature in the story.

The book’s co-author Jim Simpson is arguably more qualified than most to write about the decade – he helped create success for one of the city’s biggest cultural exports of the era, Black Sabbath.

He was their first manager and took them to the top of the charts. He also managed other successful bands, found, toured and recorded American blues musicians and ran Henry’s Blueshouse and the Big Bear record label.

The ‘Dirty Stop Out’s Guide to 1970s Birmingham’ – which is full of rare photos and memories from luminaires spanning Jasper Carrott to Tony Iommi – features venues like the legendary Mothers, once described by John Peel as the best club in the world.

Jim Simpson said: “Birmingham had a thriving live music and nightlife scene in the 1970s. It was an exciting place to be and this book is a true celebration of the decade.”

The ‘Dirty Stop Out’s Guide to 1970s Birmingham’ follows best-selling editions of the book series that have been previously launched in the likes of Coventry, Sheffield, Liverpool, Manchester, Chesterfield and other places.

Ron Simpson added: “It was the decade that gave us everything from disco to punk via heavy rock and reggae and Birmingham was at the centre of everything.” 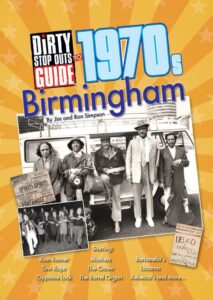