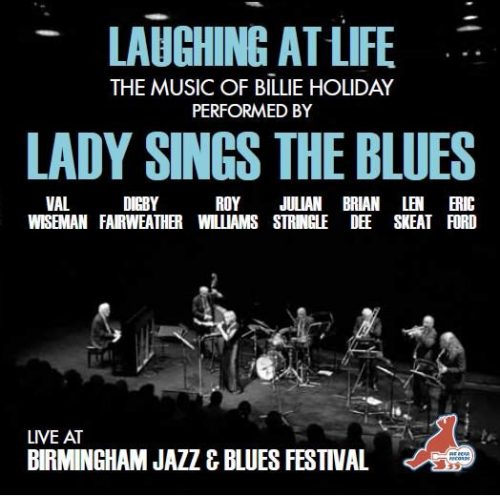 Billie Holiday’s life-story, as it has been told and retold over the years, is a catalogue of woes and tribulations. Reinforced by some of her best-known recordings, such as Gloomy Sunday, Strange Fruit and Don’t Explain, it has come to define her image to the world. But the image is misleading. Millions of other people have lived troubled and unhappy lives, yet none of them became Billie Holiday. It’s because of her rare gifts that she is loved and revered today, a century after her birth, and celebrated with affection by artists around the world.

This is the second album based on Lady Sings The Blues, the concert-show inspired by Billie. Its very title, Laughing At Life, should help to dispel some of the accumulated gloom, and the music itself will certainly manage the rest. The sheer variety contained in these songs shows off Billie’s expressive range better than any learned article. There are ‘swing-sing’ numbers from the 1930s, ballads and ‘mistreated woman’ pieces from the 1940s, and a hint of the wealth of classic American songs which she finally got around to recording in the fifties.

The aim of Lady Sings The Blues is not to produce a slavish imitation of Billie or an exact reproduction of any of her records, even if that were possible. It’s to revisit her repertoire and in so doing evoke the spirit, and to a certain extent the period, of her work. That’s Life I Guess is a good example. The routine follows the 1936 version fairly closely, with the vocal delayed until the second chorus and brief solos from Julian Marc Stringle on clarinet, Digby Fairweather, cornet, and pianist Brian Dee. (The originals were Benny Goodman, Jonah Jones and Teddy Wilson.) Val Wiseman’s easy, almost conversational approach fits the tempo to perfection. It’s her voice, not Billie’s, but the effect is charming and convincing.

Sometimes a song suits a singer so perfectly that we assume it was specially written, only to find out that they only met later, by lucky accident. That’s the case with You’ve Changed. There’s something about the way the descending phrases of the melody chime with the despair of the lyric that are pure Billie Holiday. She recorded it towards the end of her life, in 1958, for the album Lady In Satin. So it comes as something of a shock to discover that it was written by Carl Fischer and Bill Carey in 1942 and first recorded by Dick Haymes, with Harry James’s band. But it’s Billie’s song now and, for me, Val’s version of it, with Brian Dee’s brilliant piano accompaniment, is the high spot of this album. A wonderful lesson in how to sing one of Billie’s songs without overt imitation but with the authentic feeling.

God Bless The Child, another duet for Val and Brian, is a song that Billie did actually write – in collaboration with Arthur Hertzog Jnr (Don’t Explain was another) – and it has survived to become the one for which she is now perhaps best known. It was assumed to be autobiographical, expressing Billie’s personal philosophy.

The earlier numbers – That’s Life I Guess, Miss Brown To You, How Could You?,Laughing At Life – are full of energy, fun and terrific playing. In the case of the title piece the unbuttoned swing of Digby, Roy, Julian and the rhythm section easily surpasses the rather stolid 1940 original. The more sober songs of the 1940s are spiced with great playing, too, notably Julian’s clarinet in Loverman and Brian’s piano throughout.

I enjoyed this so much, I dug out the previous Lady Sings The Blues CD and enjoyed that, too. I looked up its date (1990) and, apart from noticing how little Val’s voice had altered in the intervening years, I discovered a strange coincidence. The distance between February 1990 and July 2015 is 25 years and five months. The distance in time between Billie’s first studio recording (November 1933) and her last (May 1959) is 25 years and six months. Make of that what you will