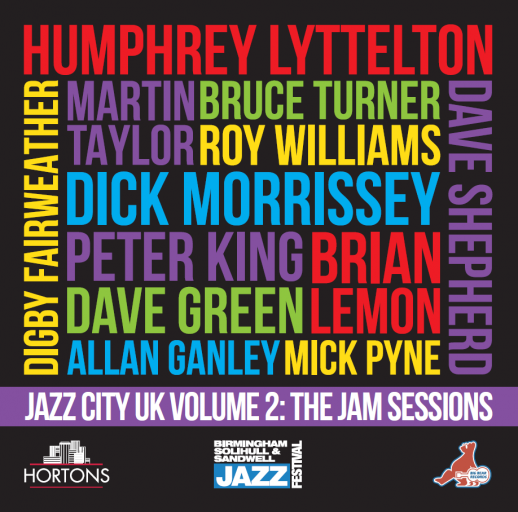 “This is probably as close as we’ll ever get to matching the legendary Buck Clayton Jam Sessions and possibly better than many of the JATP concerts recorded by Norman Granz.” – Lance Liddle, Bebop Spoken Here

This is the second album sailing under the flag of Jazz City UK, recorded in Birmingham and seeking to draw attention to this City’s jazz heritage. Back in 1984, Big Bear had the idea of emulating the Eddie Condon New York session where two front lines alternate, and sometimes play together.

On a summer’s afternoon in Birmingham’s Cannon Hill Park, Humphrey Lyttelton and the then up and coming Digby Fairweather headed the two four man front lines backed by the rhythm section that made up a round dozen on stage. The session featured star players from across a wide spectrum of British jazz, the saxophone pairing of Dick Morrissey and Bruce Turner for instance, with everyone at the peak of their ability.

The concert worked so well that that it was repeated as the key element of the Birmingham Jazz Festival which it had spawned. Humph, Dick Morrissey and Roy Williams were on hand again three years later when The British Jazz Awards enjoyed a ritzy evening at Birmingham’s Grand Hotel when no less a personage than the great American pianist Sir Charles Thompson played for diners! The resultant jam session featured some of the very best from a great era for British Jazz.

Both jam sessions were originally issued as Vinyl LP albums, The M&B Jam Session and British Jazz Awards 1987, a copious selection from each have been remastered and are now available on CD for the very first time.

Many thanks to Hortons for their support in producing this album